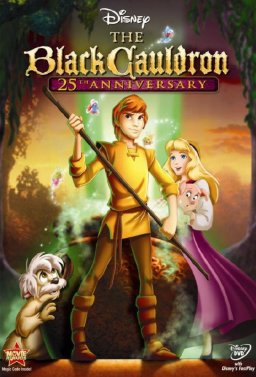 On the small farm of Caer Dallben, Taran is an Assistant Pigkeeper to the enchanter Dallben, with dreams of becoming a great warrior. However, he has to put the daydreaming aside when his charge, an oracular pig named Hen Wen is kidnapped by an evil lord known as the Horned King. The villain hopes Hen Wen will show him the way to The Black Cauldron, which has the power to create a legion of invincible undead warriors, known as The Cauldron Born. With the aid of Princess Eilonwy, an exaggerating middle-aged bard named Fflewddur Fflam, and a pestering but ultimately loyal creature called Gurgi, Taran tries to save the world of Prydain from the Horned King. As the new friends face witches, elves, magic swords, and the Cauldron itself, Taran starts to learn what being a hero really means and that some things are more important than glory.