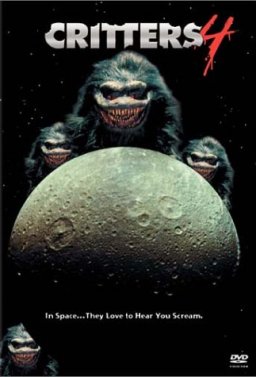 "Critters 4" starts, somewhere in Kansas and replays the last few minutes of "Critters 3" (1991) as the recurring character of Charlie McFadden (Don Keith Opper) is about to shoot the last two remaining Critter eggs in the universe which, we are informed, would mean the extinction of the entire Critter race which is against some sort of intergalactic zoological law or something like that. Charlie's bounty hunter friend Ug (Terrence Mann) is now known as Counsellor Tetra and is a top ranking official at the intergalactic council and orders Charlie not to shoot the eggs but instead put them into a pod that will land nearby very soon. The pod does indeed land nearby very quickly & Charlie does indeed put the eggs into it but he is also caught in the pod which I presume cryogenic-ally freezes him as it's never really explained. "Critters 4" then informs us that we are 'Somewhere in Saturn Quadrant 2045' where a salvage ship comes across the pod drifting in space. Rick (Anders Hove) decides to claim the unidentified, to them anyway, pod and try to make a bit of cash out of it. With the help of his crew, Ethan (Paul Whitthorne), Fran (Angela Bassett), Al Bert (Brad Dourif) and Bernie (Eric DeRe), the pod is successfully recoveRick and escape into the space-station. red. They get in touch with the intergalactic council and Counsellor Tetra say to go to an abandoned space-station where a trade will be made for the pod and its contents, Tetra also specifically tells Rick not to open the pod. So in true horror film tradition Rick opens the pod, thaws Charlie out and the Critter eggs which hatch, kill Rick and escape into the space-station.