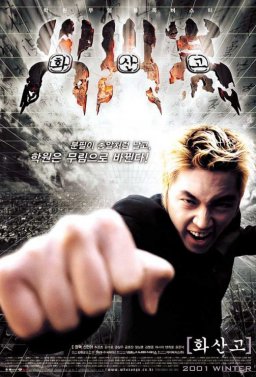 Volcano High School is marking its 108th. Every student is a martial arts expert, so it is not surprising to see tea leaves moving in the shape of dragons or hallway windows shattering into bits with no one touching them. At Volcano High, the legend of the Secret Manuscript - the one who inherits these writings will rule the world - has been continuously passed down. From the outside, Volcano High School seems peaceful. But a bitter showdown for the Secret Manuscript is at hand. Among the challengers are the assistant principal who thirsts for the principal's position; SONG HakRim(KWON SangWoo) becames the best student in the shortest time in the history of Volcano High, while JANG Ryang(KIM SooRoh), captain of the weight lifting team, dreams of being the best at Volcano High. One day, KIM KyungSoo(JANG Hyuk) transfers to Volcano High, after being expelled xpelled from eight other schools because he couldn't manage the gift of his power. KyungSoo is determined to graduate from Volcano High no matter what happens. At a school where all the students are martial arts experts, inevitably they grasp the potential talent of the new kid. Will KyungSoo manage to graduate in the middle of the violent storm caused by the battle for the Secret Manuscript?