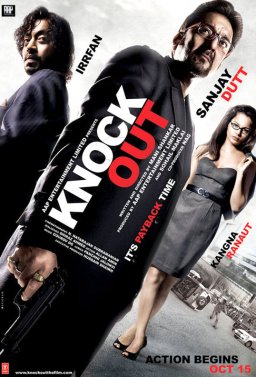 KnockOut is a fast paced thriller that happens in real time. In just two hours 11am to 1pm an enigmatic vigilante pulls off an incredible, mind blowing coup and a new chapter of Indian history is written. Sanjay Dutt plays a new age lone ranger who has the latest weapons and gadgets at his fingertips, and is a man who trusts and depends on no one. Working alone, he effortlessly uses his wit, his skills at hand to hand combat, and his love for stealth technology, to manipulate and trap his elusive target. The target, played by Irrfan, is a street smart investment banker who has made his way to the upper echelons of power. A man who unwittingly holds the keyto India's destiny, Irrfan is a man consumed by his own obsessions, an extremely clever and unstoppable foe. Through a brilliant play of truth and pretense, Sanjay strips Irrfan of his arrogance and attitude, opens his heart and confounds his brain, locking him in a tangle beyond redemption… a tangle which can only be unraveled one way… leading to the biggest 'counter heist' in the history of this nation. Hot on the trail of these two men is a hardnosed television journalist, played by Kangna Ranaut. She will stop at nothing… or so she believes, till she is faced with the ultimate call of conscience. Choosing between another man's life or herself… Choosing between the country or herself. And each time she rises to the occasion, showing that the new India has its heart in the right place, its soul intact. As the film reaches its action packed climax, every citizen of this country becomes a witness to the live action that unfolds before television cameras. For a nation that has endured political thieves for six decades, this counter heist of a massive scale wakes them up in a way nothing has ever done before. The film ends in a huge wave of euphoria. The mysterious vigilante fights and wins an impossible battle, a battle that raged not just in the streets of Mumbai but also in the minds of the whole nation. True to style, he manages to walk off into the celebrating multitudes, his identity forever hidden… maybe to strike another day… and India awakens to a new beginning.