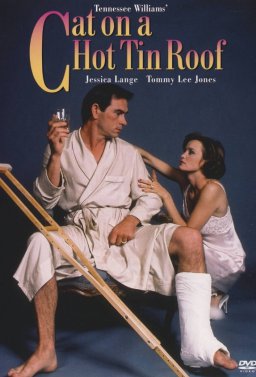 Coproduced by Showtime and PBS, the 1984 TV version of Cat on a Hot Tin Roof is based on Tennessee Williams' Pulitzer Price winning play, previously filmed in 1958 and 1979. Jessica Lange stars as Maggie "the Cat", the frustrated, overheated wife of alcoholic former football jock Brick (Tommy Lee Jones). All of Brick's family have gathered for the 65th birthday party of Big Daddy (Rip Torn), and to celebrate the news that the family's patriarch is not suffering from cancer, as earlier reported. Hostilities explode as Maggie goes after Brick for his drinking and impotence, Brick and Big Daddy have a confrontation over Brick's supposed homosexuality, and the doctor arrives with the news that Big Daddy is dying after all--and his estate is up for grabs. Kim Hunter, David Dukes and Penny Fuller costar in this uncensored version of Williams' stage classic, which first aired on pay cable, then was telecast on PBS' American Playhouse.