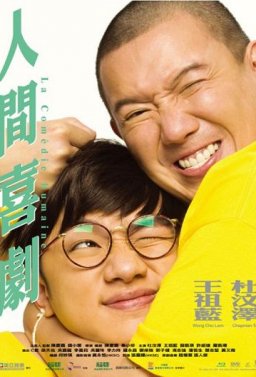 Writer-director Chan Hing-Ka has never excelled at pacing his films, and La Com&#233;die Humaine follows suit. This surreal buddy comedy about a Mainland hitman and a Hong Kong screenwriter features reams of postmodern cinema-skewering gags, many quite funny and all stretched out to egregious lengths. There are some quick-hit gags among the bunch, but by and large the film's jokes are lengthy and require thought, initially engaging before sometimes becoming plodding. Worse, the story loses momentum and begins to feel aimless. The caveat to all of this? That La Com&#233;die Humaine is a creative and surprisingly affecting Hong Kong film. It's not for everyone - especially non-fans of Cantonese comedy or those with an aversion to Chan Hing-Ka's forced existentialism - but La Com&#233;die Humaine qualifies as one of the more special Hong Kong films of 2010.
Chapman To stars as Spring, a Mainland hitman and movie buff who arrives in Hong Kong with partner Setting Sun (Hui Siu-Hung). Immediately, the two get separated, and Spring takes to waiting on a rooftop for Setting Sun to show. However, he gets sick and somehow falls under the care of screenwriter Soya (Wong Cho-Lam), who nurses him back to health in thorough and thoroughly annoying fashion. The gags here are broad and sometimes homoerotic, with overdone performances (Chapman To's faux mainland accent is a highlight) and some hilarious and also potentially disturbing moments - especially one where the audience gets a good long look at Chapman To's naked body (Yikes!!). Then the movie parodies settle in. One gag, where Spring uses movie titles to tell his personal story, is an especially funny one, but it also stretches on for an eternity. At this point, the film has provided some smart jokes, but still hasn't yet found its narrative footing.