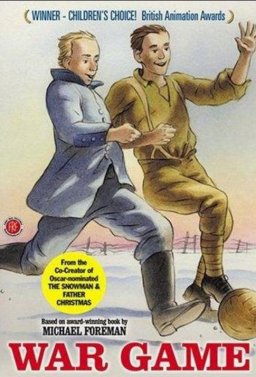 In the short, the boys (Will, Freddie, Billy, and Lacey), are out playing a game of football when they hear about England declaring war on Germany. As in All Quiet on the Western Front, the boys waste no time in enlisting in the army (at this point the singing Kitchener springs from his poster to tell Will that he should 'play the game'). Later that night, Will and Lacey tell their parents and Annie of the great news. While Dad wishes them well, and Annie is sobbing for Lacey, Mum (voiced by Kate Winslet) tells her boys that war is not a game, and that they will be killed. But regardlessly, the boys leave for France, where they encounter hardships of the trenches, shooting competitions with the Germans, and bully beef.